Parkinson’s disease (PD) is a progressive neurodegenerative disorder characterized by both motor and non-motor symptoms. Within the non-motor domain, there is increasing evidence of auditory processing alterations in patients with PD. However, the nature of these alterations has not been clarified sufficiently. In the current project, we want to further unravel the complex interplay of the different disease hallmarks on auditory processing. The goal is to investigate the different stages of auditory intensity perception in PD by using both audiological and neurophysiological measurements.

In this talk, I will present the audiological results of 25 patients with idiopathic PD and a matched healthy control group. Based on the study results, I will discuss the involvement of the peripheral and central auditory system, as well as the effect of dopaminergic medication on auditory function in PD.

In addition to the audiological measurements, I will talk about the unique opportunity of both cortical high-density EEG and local field registrations to investigate the bottom-up and top-down stages of auditory intensity processing in PD. 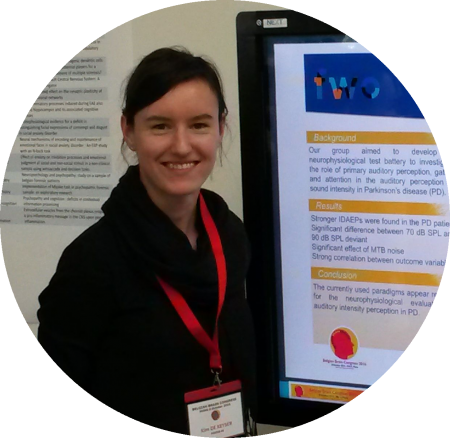 Kim De Keyser is a PhD student of the Research Foundation – Flanders. She works at Ghent University, at the Department of Rehabilitation Sciences. Her research focuses on the relationship between speech perception and production in patients with Parkinson’s disease. Her PhD fellowship has been supervised by Professor Miet De Letter and Professor Annelies Bockstael, who works as at the École d’orthophonie et d’audiologie at the UdeM.